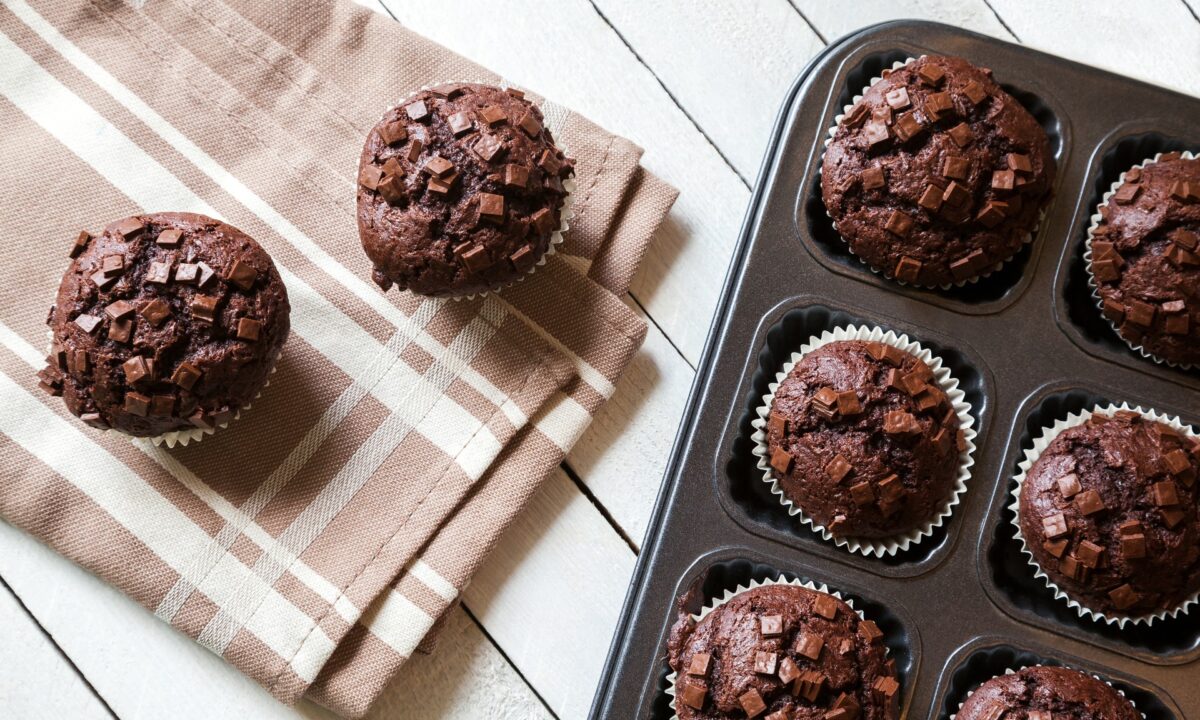 In the middle of the night, halfway through a drive across the country, I fanned out from the driver’s seat at another random gas station. Someone special was waiting at the east end of Interstate 90, but the rig and I both needed fuel. Unleaded and Road Warrior Blend, respectively.

As reliable as the hum of diesel at a truck stop, there’s a Chocolate muffin in the store, baked by a semi-local bakery, wrapped in clear cellophane and called “Double Chocolate Muffin”, or maybe “Chocolate-Chocolate-Chunk Muffin”, and sometimes “Chocolate Bundt Cake”. Sometimes the cashier will insist he doesn’t sell them, but like love, you can find this muffin if you look hard enough or lower the bar enough to Hostess, if necessary. Not the cream-filled cupcake, but a legit chocolate muffin.

Anywhere else, that muffin might be as forgettable as one endless freeway mile after another. But our expectations are low at the service station, while our needs are specific. At the wheel, the flavor of coffee couldn’t be less urgent, while the caffeine content couldn’t be more crucial. The dark, chemically moist and shiny chocolate muffin encourages caffeine consumption by making mediocre coffee taste like a homemade cup, brewed by a bearded guy in a flannel shirt.

Gas station coffee and chocolate muffin not only elevate each other in flavor, they combine forces to turn you into a well-oiled driving machine.

They both contain caffeine, of which only coffee contains adult levels, while cocoa is rich in a similar molecule, also a stimulant, called theobromine, which translates from Latin to “God’s food”.

Like caffeine, theobromine belongs to a family of plant defense molecules called xanthines. Not quite as potent a stimulant as caffeine, it lasts longer and there is evidence of the so-called entourage effect at play, where each becomes more potent in the presence of the other leading to calm hyper-focus. Theobromine also lessens the jittery feelings that caffeine alone can give, and there is evidence of long-term improvement in cognitive function, while reducing the risk of Alzheimer’s disease and cardiovascular disease. It even protects tooth enamel from decay.

Cocoa also contains several cannabinoids and high levels of phenylalanine, which release the endorphins dopamine and noradrenaline, responsible for the ecstatic feelings associated with falling in love, and the euphoric energy that keeps new lovers talking for hours. Studies have shown that most of the phenylalanine in chocolate is broken down by enzymes before it has a chance to release those endorphins, but true Cupids know that some of those biochemical arrows will hit their targets.

And what discussion of euphoria would be complete without good old sugar, which also triggers the release of endorphins, giving you sharp, even dull pain. Like caffeine, sugar can make you jittery and crash, two words you don’t really want to say in the same sentence as “drive.” Luckily, all that theobromine soothes the mind and body, making the journey home easier.

On the road once more

I got off I-90 in Newton, Massachusetts, and drove through the outskirts of Boston to my mother’s apartment. A few days later we headed to Montana, coffees in the cup holders and Dunkin’ Donuts chocolate muffins in the console, which I mistakenly assumed were our last best road muffins.

Driving through Chicago, you can’t get enough chocolate, caffeine, or gas. I squeezed the steering wheel so hard I was afraid to break it. In LaCrosse, Wisconsin, I discovered my dream chocolate muffin at a gas station called Kwik Trip. I continued to find these blessed oases until I left Minnesota.

In Murdo, South Dakota, a little after midnight, the convenience store attendant insisted there was no chocolate muffin, which is still the case. I checked near the cafe – still my favorite spot – then the refrigerated crate where the sandwiches are, then near the donuts, past the corn dogs, and kept going until I finally found that elusive, active theobromine on the Hostess rack. When you’re in limbo, you don’t care to lower the bar a bit.

The attendant managed to call me and take my money without recognizing me or my chocolate muffin, probably annoyed that I looted his stash. No matter. I had what I needed to fill another tank of gas, to the greatest state in the world, while my Valentine slept in the passenger seat.

When I got back to Montana, I contacted the good people at Kwik Trip. It’s quite an operation, vertically integrated to the point of having its own dairy. And they were kind enough to provide their muffin recipe. With this muffin and a cup of coffee, anything is possible.

Preheat to 375 degrees F and line muffin cups with tins (or lightly grease and flour).

In a large bowl, whisk together oil, sugar and milk. Stir in eggs and vanilla until well blended. Gently stir in sour cream until just blended.

In another medium-sized bowl, whisk together the flour, cocoa powder, baking soda, and salt.

Pour chocolate muffin batter into prepared muffin pan, filling 2/3 to 3/4 full. Sprinkle the tops of the muffins with the remaining chocolate chips.

Bake at 375 degrees F for 18 minutes (a toothpick inserted in the center should come out with a few lightly melted crumbs).

There are many ways to combine chocolate and coffee, but when driving, one-handed medicine is essential. A decent mocha, with four shots and plenty of cocoa, does the trick. But the gas station version, meh coffee mixed with hot chocolate, has enough sugar to make you want to get out and run beside the car. But we don’t need that much. In both coffee and chocolate, we add only the amount of sugar needed.

I prefer to brew them together, preferably in a system that won’t get gummed up by the cocoa butter in those nibs. The stovetop espresso maker, aka the moka pot, gets clogged. The French press is doing well, but it needs to be worked on gently. The AeroPress is out. Ultimately, it’s the percolator that’s best for getting chocolate beans and coffee, and logging the miles.

Brew the cocoa nibs and ground coffee together, as you would your regular cup of coffee. Serve with cream and sugar, for more driving force.